Sadly we must update you on our efforts to recover the Golden Retriever ADA-designated service dog unlawfully held by Golden Retriever Rescue of the Rockies at this time. Service Dogs may be bred and we never breed without the mission of retaining a puppy for our own training.

This dog was surrendered when one of our founders was symptomatic with her well-documented, medically verified PTSD; in error, when exhausted, depressed, sleep-deprived, and panicked. The Rescue was not gracious enough to return her to us as a disability accommodation made under Title III of the Americans with Disabilities Act, and the Colorado Antidiscrimination Act codified in the Colorado Revised Statutes.   We sought the return of two of three inadvertently relinquished dogs; only one has been returned.

We asked for her return under the provisions of federal and state civil rights law as a “reasonable accommodation.” A “reasonable accommodation” is a variation in policies and protocols to permit equal opportunity.  One example;  an Afghanistan Vet wishes to go into a restaurant and has his PTSD Service Dog with him.  He does not feel safe in the world without the specifically trained interventions of the dog.  He has the right under federal and state law to have this dog with him  everywhere, because it is trained to do for him what he cannot do for himself.  To turn him away or refuse the dog is a violation of federal law and state law.  Google reasonable accommodation and learn.

THE PROPER RESPONSE TO A REASONABLE ACCOMMODATION REQUEST FOR A WILLINGLY RELINQUISHED SERVICE DOG IS TO RETURN HER.  A SERVICE DOG IS NOT AN EMOTIONAL SUPPORT ANIMAL. Click on the link and LEARN.

To our great dismay and profound suffering, the AFOREMENTIONED Rescue’s help last winter when we were terrified and symptomatic came with many hidden conditions and ultimately, grave deceptions and distortions.

AT NO TIME DID THIS “RESCUE” OFFER TO FOSTER SEVERAL OF OUR SERVICE DOGS OR ASSIST US IN THE REARING OF OUR PUPPIES WHEN WE WERE EXHAUSTED AND OVERWHELMED AND HAD SPENT $4K TO TREAT PARIS, WHO HAD A RETAINED PLACENTA.

OF COURSE WE HAD BEEN TAKING CARE OF HER AND OF COURSE WE WERE IN TOUCH WITH OUR VETERINARIANS. BUT THE RESCUE INSTEAD OF FIGHTING US, COULD HAVE HELPED US INSTEAD OF SWOOPING IN LIKE AVENGING ANGELS AND GRABBING UP OUR PUPPIES, IMMEDIATELY PLACING THEM IN THE ARMS OF THEIR DONORS, PAYING US MERE PENNIES ON THE DOLLAR WHEN THE RESCUE TAKES IN THOUSANDS A YEAR, ENOUGH TO RESCUE THE “TURKEY DOGS.”

IT IS WRONG, IMMORAL, CRUEL AND ACTIONABLE TO PRETEND THAT SOMEONE WITH PTSD’S SYMPTOMS ARE NOT HER SYMPTOMS, TO TRY TO DIVORCE HER ILLNESS FROM WHAT SHE SAYS AND DOES WHEN TRIGGERED BY EXHAUSTION AND DISTRESS, I.E. TO REFUSE TO PLACE HOW SHE IS IN THE CONTEXT OF WHO SHE IS AND TO NOT COMPREHEND THAT BY STATE AND FEDERAL LAW YOU HAVE THE “DUTY TO ACCOMMODATE THE MEMBERS OF A PROTECTED CLASS.”.

BUT GREGORY EURICH, SHILL LAWYER FOR THE RESCUE, HAS EFFECTIVELY CONVINCED THE DIVISION OF CIVIL RIGHTS, CHARGED WITH UPHOLDING ANTIDISCRIMINATION STATUTES IN COLORADO, ONE JUST THAT;

PTSD IS A GRUELING ILLNESS. HAVING PTSD DOES NOT MEAN THAT YOU CAN’T BE AN EXCELLENT BREEDER OR THAT YOU DO NOT HAVE AND CANNOT BY LAW HAVE A TEAM OF GOLDENS THAT IS TRAINED AS PSYCHIATRIC SERVICE DOGS WHO ARE SPECIFICALLY TRAINED PER THE ADA TO INTERVENE IN YOUR PTSD. SUCH A DOG IS NOT AN EMOTIONAL SUPPORT DOG.

PTSD IS AN ILLNESS IN WHICH ONE LIVES IN A HEIGHTENED STATE OF VIGILANCE AND WHEN TRIGGERED, BY MULTIPLE STRESSORS THAT ECHO PRIMARY TRAUMA, IT IS COMMON TO REACT IN A STATE OF “FIGHT OR FLIGHT,” AS IN BECOME VERY ANGRY AND LASH OUT.  MOST PEOPLE WITH THE ILLNESS REGRET THEIR REACTIONS BUT OFTEN HAVE NO WAY OF PREVENTING ‘AN OUTBURST. OUR “TERRIBLE” OUTBURSTS HAVE BEEN CONFINED AT THEIR WORST TO EXTREME BUT METAPHORICAL STATEMENTS CRITICAL OF THE CIVIL RIGHTS VIOLATION OF “GRRR” ON THIS BLOG–OUR CONSTITUTIONAL RIGHT. WE HAVE BEEN HAPPY TO AMEND EXTREME STATEMENTS WHEN NECESSARY.

IT WAS INHUMANE, CALLOUS AND WRONG OF THE RESCUE AS WELL AS BREAKING THE LAW, TO REFUSE TO RETURN THOSE DOGS AND TO CALL A DEPUTY ON US, WHO IN FACT, REFUSED TO PROSECUTE FOR OUR FREEDOM OF SPEECH, THE METAPHOR WE USED IN EXPRESSING OUR DISTRESS WHEN THE RESCUE VIOLATED CIVIL RIGHTS LAW I.E. REFUSED TO RETURN A SERVICE DOG INADVERTENTLY SURRENDERED WHEN COMPROMISED. IT IS NOT UP TO SOME SHILL LAWYER WHO WORKS FOR THE RESCUE TO OPINE ON OUR SYMPTOMS NOR THE SHILL EVALUATORS  AT THE COLORADO DIVISION OF CIVIL RIGHTS TO USE OUR SYMPTOMS TO JUSTIFY BREAKING AND VIOLATING THE COLORADO ANTIDISCRIMINATION ACT AND THE ADA.

MARY KENTON AND GREGORY EURICH DO NOT WANT YOU, THE COLORADO AND NATIONAL READER, TO KNOW WHAT THEY ARE AND WHAT THEIR AGENDA IS.  THEY WANT TO LOOK GOOD SO THAT YOU WILL GIVE THEM YOUR MONEY.  RESEARCH THE BILLION DOLLAR RESCUE INDUSTRY ONLINE.

IT IS A VERY BAD IDEA TO TRIGGER SOMEONE’S PTSD BY DENYING HER LAWFULLY MADE DISABILITY ACCOMMODATION.  LADY JUSTICE WILL NOT BE BLIND TO THESE DISCRIMINATORY COWARDS.  PLEASE READ ON AND BE ENLIGHTENED.

This Rescue is managed by Mary Kenton, and its attorney is Gregory Eurich.  These two individuals have proven themselves to be the least compassionate people involved in the Golden Retriever world in Colorado.  They do not want to gain any understanding of the role of PTSD itself in our recent deplorable series of interactions.  We are sorry to subject you the reader to our ensuing statements, but please read on and note that coming soon is the story of our most recent whelping and why we determined, despite the fact that we have two Junior Champions and the most beautiful and loved dogs in the State, to wait until our two bitches’ next season in the late fall/early winter to breed again.

The Rescue has stopped at nothing including lying to the Colorado Division of Civil Rights, artfully biasing the Division Evaluator through its malign and unethical attorney.   He and the Rescue lied to the Division in stating that our dog had not had medical treatment when she received appropriate triage from two veterinary practices at two clinics, and when we were pursuing further treatment at the time of her surrender.

The attorney has been in possession of medical documentation of our disabilities and yet dared to state to the Division that he questions whether or not we have PTSD.  The attorney demanded a “quid pro quo” for the return of one of our dogs.

This attorney, worth less than something stuck to the bottom of a shoe, dared to question whether our founder has a legitimate disability and did not reveal that we begged for our dog back before resorting to contacting the Division.

Our dogs have been designated a psychiatric service team by the Larimer County Humane Society and our physician,  and after the Rescue dared to purchase puppies from us and then call the Society complaining that we had sick dogs, the attending deputy, one Jason Dean, Larimer County Humane Society, stated that their complaints are unfounded; he stated that our dogs are beautiful, clearly in excellent health, and well cared for.  Do call him and ask him about his visit. None of our inadvertently relinquished dogs or puppies were sick until arrival at the congested, mismanaged  Rescue in Arvada. Do not donate to this animal hoarding operation dressed up as a Rescue..

We have never threatened this Rescue on this blog with anything but legal action.

The Rescue refused to disclose to us that it would not return our dog because we utilize 43″ crates in our living room in brief confinement of our dogs when we live on six acres and have been raising high quality Golden including showing them, training in obedience and field, for years.

THERE IS NO LAWFUL REASON TO RETAIN POSSESSION OF A WILLINGLY RELINQUISHED SERVICE DOG WHICH IS NOT A SUPPORT ANIMAL.  LEARN THE DIFFERENCE HERE.

We call for a full boycott of Golden Retriever Rescue of the Rockies.  The organization has backroom deals with humane societies in the Rocky Mountain West to whisk away unclaimed Goldens and never return them even if they have gone missing and unclaimed; read the countless stories on the Internet of people searching frantically for their dogs only to have to battle a Rescue to get them returned. This Rescue bought up our puppies to keep its donors happy.   Donate at your own risk.

Two beautiful puppies from this litter belong to John and Dorian Tippett, Fort Collins, CO and went home with a clean bill of health at vet check.  Several were purchased by Golden Retriever Rescue of the Rockies and were of such high quality they were indeed put in the arms of donors.

Sadly, we HAVE needed to update our followers on the disgusting discriminatory practices of this very Rescue, which are viciously “defended” by its lowball attorney.

As for our standing in the Golden Retriever World, read on.  See first, the endorsement below.

Professor Jenne’ R.Andrews is a mentor and consultant to Golden Retriever breeders all over the world.  She founded the bloodlines Gilded Peak, JenLore and Ardorgold, present in the pedigrees of the West’s top fanciers.  She has campaigned her dogs in the AKC showring and extensively trained in the field.  She is an accomplished “veterinary midwife” and marketeer, having bred, nurtured and sold over 25 high quality litters. in the past two decades..  She has stood her 90’s aquisition Rachel’s Fanfare for Colombo at stud, producing quality bitches for members of the Mile Hi Golden Retriever Club by champion ptd Fanfare, and has effectively used the technique of line breeding to pack her pedigrees with the  most elite and high performing dogs in the world.  She maintains a small breeding program with an eye to careful and intricate line breeding that renders her puppies typey and sound. Her latest import is of a male puppy , linebred on Dewmist, No .1  kennel of Europe and beyond. Encompassing this great passion is a teaching and literary career culminating this year in the new release of a collection of poetry from Orfea Books.   She blogs politics and book reviews at http://loquaciouslyyours.com and curates British Golden Retriever groups on Facebook.

Ardorgold Canine Companions Up and Running!

33 Years of Breeding the Best to the Best… 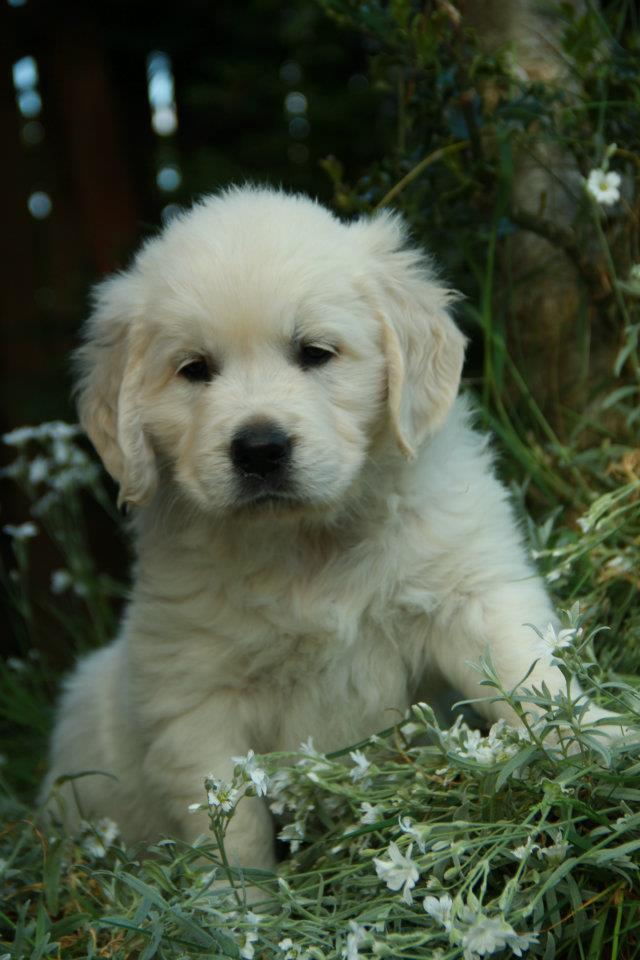